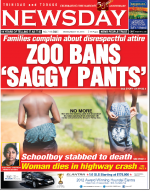 Responding to scores of requests from its paying patrons over the last month, the management of the Emperor Valley Zoo took the bold decision to ban entry to men who are inappropriately dressed in sagging trousers which expose their jockey shorts or other choice of underwear being worn.

Athough the origin of “Sagging” is not known for sure, the prevailing opinion seems to be that it began in prison, due to inmates not being allowed to wear belts. Many people believe that bearing this in mind, it is therefore incomprehensible as to why this would gain popularity here in Trinidad or elsewhere, especially among the younger generation,
END_OF_DOCUMENT_TOKEN_TO_BE_REPLACED