‘Justice not in the road’

Shortly after a candle ritual and a two-mile peace walk in Moruga to mark the end of several days of fiery protests over police killings of three friends on July 22, the funeral for the first victim was held in San Fernando yesterday.
END_OF_DOCUMENT_TOKEN_TO_BE_REPLACED

MY instinctive reaction when I first learned of the carnage that Anders Breivik unleashed in Norway was, “He is a very mad man…sick!” I imagine most persons reacted similarly to the terror, the deaths of innocent Norwegians this lone lunatic inflicted within a few hours. Norway is one of the least controversial countries in the world. It is wealthy, it has a near-perfect blend of economic and social policies, and it provides a refuge for less fortunate people from elsewhere in this imperfect world.
END_OF_DOCUMENT_TOKEN_TO_BE_REPLACED

END_OF_DOCUMENT_TOKEN_TO_BE_REPLACED

On Monday next (Emancipation Day) black folks will come out in full ethnic regalia to commemorate the emancipation of our forefathers and foremothers. They will march from the Brian Lara Promenade to the Savannah and make uplifting speeches (as they should) about our condition. The next 364 days thereafter they shall continue their slide into penury and humiliation as the People’s Partnership (PP) government does everything to ensure that African people eat the bread the devil kneads. In this new dispensation no mercy will be shown and no sympathy offered.
END_OF_DOCUMENT_TOKEN_TO_BE_REPLACED

Part 2 of this Emancipation Day Special focuses on the power dynamics between Trinbagonians of Indian descent versus the powerlessness of Trinbagonians of African descent. And this overt ethnic imbalance is real despite the current United Nations-sponsored year-long celebration.
END_OF_DOCUMENT_TOKEN_TO_BE_REPLACED

AS the nation prepares for a year of activities to mark our 50th anniversary of independence from Britain in August 2012, people of my generation must be wrestling with a mixture of emotions. There is a sense of pride, of having been there when the Union Jack was lowered for the last time, and the red-white-and-black colours of the new state hoisted atop flagpoles across the country. One had to be there to experience the birth of a nation to understand the pride, the joy, the celebrations. We were part of history, however insignificant we may have been in the hierarchical scheme of things.
END_OF_DOCUMENT_TOKEN_TO_BE_REPLACED 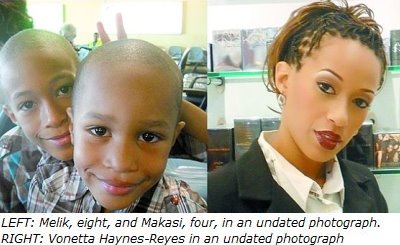 Husband finds wife and sons murdered
Residents of La Horquetta were in shock last night following the discovery of a 31-year-old mother and her two children, found dead with their throats slit open. The discovery was made by the woman’s husband and father of the children. There were no arrests up to late last night.
END_OF_DOCUMENT_TOKEN_TO_BE_REPLACED

If your heritage is non-African, you are part Neanderthal, according to a new study in the July issue of Molecular Biology and Evolution. Discovery News has been reporting on human/Neanderthal interbreeding for some time now, so this latest research confirms earlier findings.
END_OF_DOCUMENT_TOKEN_TO_BE_REPLACED

Dr. Tim Gopeesingh, Minister of Education, is a gynecologist by training. He is not an educator. At the very least, his response to my inquiry proves his mis-understanding about how a Minister of Education functions. Anyone who has been following this controversy (See “Probe SEA Results” in the July 13 issue of and my subsequent letter to the Minister of Education, July 17 Trinidad Mirror) knows that I only sought to bring to the Minister’s attention the statistical improbability of 14 students from one class placing within the first one hundred students in the recent SEA examinations.
END_OF_DOCUMENT_TOKEN_TO_BE_REPLACED

In my opinion, we in T&T have a special relationship with Guyana and Grenada partly because of the regular movement of people among these territories. When I visited St Lucia for Jazz, I was surprised by the number of Martiniquans I met there, but I subsequently discovered that there is regular movement of people between St Lucia and Martinique, thanks to a fairly reliable ferry service.
END_OF_DOCUMENT_TOKEN_TO_BE_REPLACED