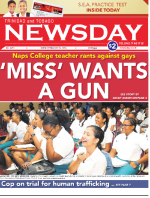 Referring to the parents of a student who had openly professed to being gay, the teacher reportedly said: “He has two parents, who should not be parents.
END_OF_DOCUMENT_TOKEN_TO_BE_REPLACED

Minister of Planning, Economic and Social Restructuring and Gender Affairs, Mary King yesterday revealed that and additional $90 million is needed to complete the National Academy for the Performing Arts (NAPA), Todds Street, San Fernando while a “few hundred million more” is needed to finish the Chancery Lane Complex a short distance away.
END_OF_DOCUMENT_TOKEN_TO_BE_REPLACED