I am an old timer. I believe integrity in public life predates the establishment of the Integrity Committee. My mother, born in 1909, used to say: “When ah dead, if anybody say ah owe dem any money, tell dem dey lie.” Her word was her bond. She believed each of us possesses an innate sense of what is right and wrong which tells us when we have transgressed those boundaries. Such a credo was part of an ethical value system that we, as black people, learned from our nineteenth-century ancestors. In those days, we did not need an Integrity Committee to tell us what constitutes ethical behavior.
END_OF_DOCUMENT_TOKEN_TO_BE_REPLACED 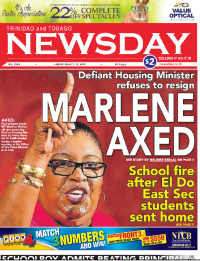 Sources added that McDonald later stormed out of the meeting, telling her driver that she had just been fired before making a call on her cellular phone as she entered her vehicle which sped off.
END_OF_DOCUMENT_TOKEN_TO_BE_REPLACED

Opposition Chief Whip Marlene Mc Donald may shut her eyes to reality, play word games and deny her parliamentary bench is split, but Friday’s partial walkout of the Chamber can leave few in doubt of the power struggle that is confusing the PNM side. Friday’s division of the bench showed TT what it has for six months suspected: since losing office, there has existed a tug of war in the Parliament between MPs loyal to new Opposition Leader Dr Keith Rowley and representatives sympathetic to their former chief, Patrick Manning. Friday was a physical manifestation of the current PNM political reality.
END_OF_DOCUMENT_TOKEN_TO_BE_REPLACED

Junia Regrello, Parliamentary Secretary in the Ministry of Community Development, Culture and Gender Affairs says it will cost about $20 million to attend to the niggling issues like lighting and flooring at the National Academy for the Performing Arts (NAPA), Princes Building Grounds, Port-of-Spain. Regrello came forward yesterday in his capacity as both performer and member of government. Along with recently appointed Sharon Christopher, chair of the management committee of the auditorium, Regrello admitted to flaws that need to be addressed.
END_OF_DOCUMENT_TOKEN_TO_BE_REPLACED