Amidst the cacophony that has erupted over the inter-island ferries fiasco, the calls for official enquiries of one kind or other into the leasing of the Ocean Flower II convince me that as a nation, we are gluttons for political punishment.

The Prime Minister, yanking our collective chains with perverse delight, names business magnate Christian Mouttet as sole investigator into circumstances surrounding the Port Authority’s (PATT) decision to lease the Ocean Flower II and the aptly-renamed Cobo Star cargo vessel from a seemingly mysterious company, and to hand in a report to him within 30 days.
END_OF_DOCUMENT_TOKEN_TO_BE_REPLACED

I had promised that I would not involve myself with the Ferry Imbroglio (an extremely confused, complex and embarrassing situation, full of trouble and problems) if only because the situation was/is so uncalled for and revealed such extraordinary incompetence on government’s part. The longer the problem persists, the more the government’s incompetence and the uselessness of its bureaucrats displays itself. I had hoped the government would remedy this situation by letting sunlight shine into the darkness.
END_OF_DOCUMENT_TOKEN_TO_BE_REPLACED

It is incomprehensible to me how two boards of directors at the Port Authority of Trinidad and Tobago (PATT), two line ministers responsible for the operations of the ferry service between Port of Spain and Scarborough, and a battery of senior public officers in the employ of the PATT and Government, could make such an unholy mess of the sea-bridge, culminating with the acquisition of a defective old tub that failed to even arrive in the country.
END_OF_DOCUMENT_TOKEN_TO_BE_REPLACED

When the The Honourable Attorney General Faris Al Rawi tabled for approval by the House the Report of the EBC/Presidential Draft Order to legalise the package of measures for the holding of the THA Elections in January 2017 citizens saw that a 48,000 THA electorate albeit many absentees were gifted with 12 seats of assemblymen. This formula was deemed a successful and equitable model for Local Government by the PNM in Tobago with 3600 to 4500 electors per seat.
END_OF_DOCUMENT_TOKEN_TO_BE_REPLACED

With crime, especially murder, being the number one issue on the national agenda for more than two decades, the police cannot escape being targeted as the most blameworthy for the barrels of blood in which the nation is swirling.

In the most recent sensational case, the Tobago double-murder, the police have come under fire from just about every quarter, including the media and individuals in Britain, among them former UK High Commissioner Arthur Snell and the sole survivors of a string of similar gruesome attacks on the island, Peter and Murium Green.
END_OF_DOCUMENT_TOKEN_TO_BE_REPLACED

My last two columns, one titled “Rowley rising” and the other “lament for a falling leader”, were seen by many of my readers as being almost prophetic in the wake of last Monday’s election results.

Had I made public another document in which I analysed the results in all 41 constituencies from 2007 onwards, using historical data and trends, and projecting the 2015 results (which I circulated only to close friends), I might have been accused of being an “obeahman” or “seer”.
END_OF_DOCUMENT_TOKEN_TO_BE_REPLACED 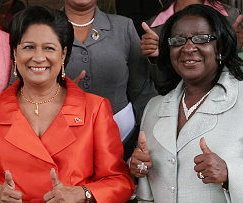 For reasons best known to itself, the ruling People’s Partnership has continued to defend its disgraced MP Vernella Alleyne-Toppin.

Not only have Government spokespersons tried to spin Ms Alleyne-Toppin’s crassness into a social concern message about rape, but UNC hacks on social media continue her denigrating diatribe against Opposition Leader Keith Rowley. But what could the UNC-led coalition hope to achieve by this? The widespread public condemnation has clearly harmed the Partnership’s image, including its trump card, Prime Minister Kamla Persad-Bissessar, who will no doubt suffer a drop in approval ratings by her refusal to remove the Tobago East MP from her entirely inappropriate post in the Ministry of the Peolpe and Social Development.
END_OF_DOCUMENT_TOKEN_TO_BE_REPLACED

Ever since Rodney Charles sent out his memo of instructions to his UNC colleagues they have been trying to depict Dr. Keith Rowley as big, black bad animal; a beast unbecoming of the office of prime minister. The present version of this attack started when Dr. Rowley took a wine, on carnival day, on an Indian woman. Many UNC politicians saw this act as verging on the sacrilegious. Now, they have sunken to the lowest of the low. They have branded Dr. Rowley and his descendants (that is, his children and his children’s children) as the products of rape.
END_OF_DOCUMENT_TOKEN_TO_BE_REPLACED

Son of Opposition Leader, mom: Our family was offered $25,000 to induce us to sign affidavit on ‘rape’

Roselyn Alleyne has said she would have been paid handsomely if she had signed a prepared affidavit stating that Keith Rowley had raped her.
END_OF_DOCUMENT_TOKEN_TO_BE_REPLACED