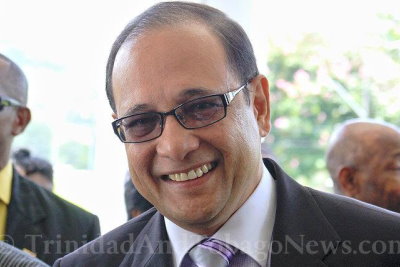 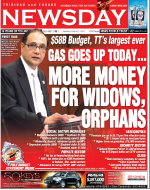 However orphans, retirees, special reserve police officers and persons involved in home construction are just some groups in society who will benefit from the country’s largest ever budget which Finance and Economy Minister Larry Howai presented in the House of Representatives yesterday.

In presenting what appeared to be a mixed budget with benefits for some persons and penalties for others, Howai made it clear that Trinidad and Tobago has “room to pursue a policy of stimulating the economy, but this does not mean we can tolerate extravagant spending.”

Howai said TT is not in the position of other countries which lack fiscal space to do anything other than austerity measures and expects to record 1.2 percent growth this year. However, he stressed that given the current global economic environment, “the situation requires a judicious mix of measures” which will provide a strong stimulus boost to the economy. Noting the transition to the use of compressed natural gas (CNG) has been less than satisfactory over the years, Howai said full transition to CNG, “would only take place in the context of the removal of fuel subsidies which would contribute significantly to the necessary and efficient allocation of resources, so important for growth and transformation.”

Stating an inter-ministerial team will look at additional measures which will reduce the current levels of subsidy, Howai said Government will invest in a $1.5 billion business plan to convert gasoline vehicles to CNG as an alternative to transportation fuel.

As an aside, Howai announced that effective November 1, a driver’s permit will remain valid for five years and thereafter upon renewal, the validity would be for a duration of five years or ten years, “at the option of the holder.”

Upon first issue, the fee for a driver’s permit will remain at $500, while the fee for five-year and ten-year renewal periods would be $500 and $1,000 respectively. He indicated that subject to approval of The Council for Trade and Economic Development (COTED), a 30 percent import duty will apply to used tyres entering the country. New tyre imports currently have this duty.

Howai followed the lead of his predecessors Winston Dookeran and Patrick Manning, declaring Government will take a tough position on the local gaming industry to bring “this industry under more effective control” and ensure more of its revenue goes into the Treasury, Howai declared: “We also propose to increase the tax levied on private members clubs from October 1, 2012.”

On property tax, Howai said a Land and Building tax regime will be put in place in the next fiscal year, “which will cover residential, commercial, agricultural and industrial land.” He gave the assurance that, “this regime will be fairer and more equitable than that which was previously proposed.” Howai explained that until this regime is implemented, “we shall continue the waiver of tax liabilities which commenced in 2010.” As he made this point, some Opposition MPs quipped “poor Prakash” as they looked at Congress of the People (COP) leader and Legal Affairs Minister Prakash Ramadhar who spearheaded the party’s famous “Axe the Tax” campaign.

Government MPs thumped their desks as Howai announced an increase of Minimum Survivor’s Benefits through amendments to the National Insurance Act. The increased benefits include spouse, $600; child, $600; dependant parents, $600 if only one parent is alive or $300 if both are alive and $1,200 for orphans. Howai further proposed to increase the disability assistance grant from $200 per month to $1,500 per month. “With respect to a child with medically certified disabilities, this will rise from $800 to $1,000 per month,” he stated. After saying this measure will take effect from February 1, 2013, Howai announced there will be a comprehensive and rigorous review of all social welfare programmes in the country to ensure greater efficiency in social expenditure. Saying these programmes will be better targeted with clear exit strategies as “people rise up from poverty and become less dependent,” Howai said, “We shall now move to make cash transfers conditional. In particular they would be tied to changed behaviours and proper parenting with children being required to be in school, be exposed to basic health care and the absence of abuse.”

On crime, Howai announced that special reserve police officers will benefit from the non-taxable allowance currently enjoyed by other members of the protective services with effect from October 1.In terms of retirement pension, Howai said the old earnings class system will be changed to a career-averaged-indexed earning system.

Confirming Newsday’s exclusive story yesterday that the Budget aimed to boost the construction sector, Howai said Government proposed to expand the housing stock by offering tax incentives to housing developers. He said these measures would apply to houses where construction started after October 1 and the building cost does not exceed $1.5 million.

He also said the National Self-Help Commission will help disadvantaged citizens to build their own homes, with a target of 100 homes per year over the next three years. Regarding the construction of commercial buildings, including multi-storey car parks, Howai proposed an exemption from corporation tax for a five-year period in respect of the profits earned in the construction and rental of these buildings.

On food, Howai said Government proposed “on a temporary basis that Value Added Tax (VAT) be removed from all food items except luxury items and alcoholic beverages.” Howai did not identify the food items which will be exempt from VAT or those that will not. Saying Government wanted the non-energy sector to account for 66 percent of the country’s GDP, Howai highlighted creative industries as an example of one of five non-energy businesses which would achieve this objective.