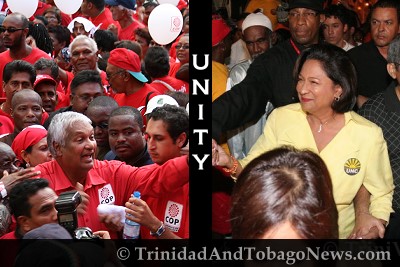 United Force: Kamla selected as prime ministerial candidate
It is final – Trinidad and Tobago’s leading opposition parties and some trade unionists have agreed to unite and contest the May 24 general election under a single banner.

Kamla to focus on women’s issues
IN her first official speech following the announcement of an election date, Opposition Leader Kamla Persad-Bissessar on Friday vowed to focus on the issues of work and family life affecting local women.

“Patrick Manning Have To Go” by Crazy

Clearing away the garbage
I am always amused when I am more diplomatic or less outspoken than someone else in any given situation. In last week’s column I advised Mrs Persad Bissessar that she must avoid the political garbage strewn around her…

Manning: Coalition a recipe for disaster

Kamla: Take back T&T
Prime Ministerial hopeful Kamla Persad-Bissessar has called on citizens to “grab the moment and take back Trinidad and Tobago” from Patrick Manning.

Don’t fight each other
UNC chairman Jack Warner has said “a new dawn, a new era” is upon us. He was referring to the deal by Persad-Bissessar and Congress of the People (COP) political leader Winston Dookeran to unite the parties to defeat Manning in the general election.

Clarifying the accommodation
In announcing the accord between her political party, United National Congress, and Congress of the People, Kamla Persad-Bissessar declared that “politics is a civilised form of war.”

EBC to spend $23m for election
The Election and Boundaries Commission (EBC) will spend $23 million in preparation for the May 24 general election.

De fosto gets conscience call
Winston Scarborough “The Original De Fosto Himself” has jettisoned the People’s National Movement (PNM) and is now aligning himself with the United National Congress (UNC).

Unity essential – but no guarantees

A new Kamla has come

Dookeran to become President
The UNC and COP agreed to fight the PNM on a joint platform. The joint platform will be launched on Wednesday night at a venue along the East-West Corridor.

SC: ‘Deal’ for president can lead to confusion

Liquidation only way out for CIB
…analysis reveals poor management of records
Clico Investment Bank (CIB) is insolvent and an analysis of the accounts say the only way out is liquidation.

…an acquisition that got the PM vex