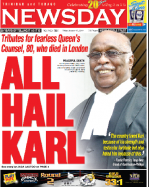 Hudson-Phillips, 80, died peacefully in his sleep in London where he and his wife Kathleen travelled last Tuesday to celebrate their son Kevin’s 30th birthday. He was expected to return to Trinidad next week.

Hudson-Phillips had three children. His eldest, daughter Jennifer, with whom he shares his law practice, was in New York with her mother when they received the news that Hudson-Phillips was found in his bed, not breathing.

Persons close to the family said Hudson-Phillips showed no sign of illness when he left Trinidad for London. “He did not complain of feeling unwell at all. It was a shock,” they admitted.

Ferreira spent two hours at Hudson-Phillips’ offices at St Vincent Street, Port-of-Spain, on Friday last and the two did as they usually would when they got together: reminisced of old times and spoke of current affairs.

“We would talk about the good old days, current events and engage in some mauve langue,” he said with a laugh.

As he recalled the life of his friend of 70 years, Ferreira described Hudson-Phillips as “a Trinidadian by birth; a Grenadian by parents; West Indian by culture; European by discipline; American by standards; Asian by taste (he loved a good buss up shot and Chinese food) and African by strength.”

Hudson-Phillips was distinguished as a former Attorney General, a former judge of the International Criminal Court, politician and legal luminary. Ferreira knew him as Karl, a man who enjoyed planting cassava, sweet potato, pumpkin, plantains and pigeon peas in Carriacou, Grenada, where he had a home.

“He only came back from Carriacou last week Wednesday. In the last few years he has been spending time at his ‘resort’ in Carriacou,” Ferreira said.

Hudson-Phillips, his long-time friend said, enjoyed sports and was an avid mas player who in his younger days played with Ken Morris’ Belmont-based band.

“He could be an elitist but was very down-to-earth,” Ferreira said. He was also a calypso afficionado and a close friend and legal adviser to Slinger Francisco, The Mighty Sparrow.

A former Queen’s Royal College “old-boy”, Ferreira became emotional when he said he lost a dearly beloved brother in Hudson-Phillips.

“I will miss him dearly,” he admitted. His only “problem” with Hudson-Phillips was that he preferred Black and White scotch whisky while his preferred drink of choice when they got together was a Johnnie Walker Black.

“He was not ostentatious. He was a simple man despite his achievements,” Ferreira said.

“He is one of the citizens of this country among a very limited few who have my respect and admiration because of his intellectual capacity, forthrightness and standards and moral integrity,” Ferreira said.

“Like everyone else he had his faults but he stood for supreme integrity and for that he will be missed,” he said. The country, he said, had a love-hate relationship with Hudson-Phillips.

“The country loved Karl because of his strength and testicular fortitude but also hated him because of this.”

He recalled Hudson-Phillips being demonised for drafting the Public Order Act, which was proposed by the People’s National Movement government in 1973, when Hudson-Phillips served as Attorney General.

“But he was fearless like that. He always stood up for what was right,” Ferreira said.

“I told him at one of our recent get-togethers that I had just re-read the Public Order Act and was of the opinion that had it made the statute books, we wouldn’t have the problems we are having in the country now,” Ferreira said.

He said Hudson-Phillips was never bitter about the response of the country in 1973.

“No he did not let that get to him. He had confidence in Trinidad and Tobago. He was 1001 percent Trinbagonian,” Ferreira said.

He also recalled Hudson-Phillips going against the advice of the late Prime Minister Dr Eric Williams and taking time off from his administrative duties as Attorney General to prosecute convicted killer Abdul Malick in 1972.

“He was fearless and was the only Attorney General in the history of TT to put on his wig and go into the court to prosecute a killer and he did that against the advice of Dr Williams,” Ferreira said. “He told Dr Williams he was not going to risk Malick with anyone else. This was the capacity and fearlessness of the man.”

Ferreira said his no-nonsense approach to conducting his affairs also saw him refusing to sign an undated letter in the late 70s which Williams demanded of PNM candidates at the time. The letter would have given Williams the authority to fire his ministers and MPs if they did not perform as he thought they ought to.

“He said he was willing to give up his seat as Diego Martin MP and did so,” Ferreira recalled.

This was the genesis of the Organisation for National Reconstruction (ONR) which contested the 1981 general elections and despite getting the second-highest vote tally in the election, failed to secure a single seat.

The ONR, with Hudson-Phillips at its helm, formed an accommodation with Arthur NR Robinson’s DLP and Basdeo Panday’s ULF to form the National Alliance for Reconstruction. The NAR won 33 out of 36 seats in Parliament in the 1986 general elections, however, Hudson- Phillips did not take an active role in the party after that and he went back to his career in law.

“It was an extremely gutsy move for him to enter politics and this bankrupted him,” Ferreira said.

“Karl has paid more than his fair share of dues. He invested everything almost sacrificing his profession as a young man,” he said. “He is one of those citizens this country owes an eternal debt of gratitude for his contribution and self sacrifice,” he added.

Speaking with Newsday yesterday, Liverpool said the song was based on the “dreaded Public Order Act.”

“People were afraid of him and his tongue,” Liverpool laughed. “I still am…until his death,” he joked.

Liverpool said Hudson-Phillips was not offended by the calypso and in fact the two met the same year in Grenada and shook hands and embraced.

They met regularly at the Queen’s Park Oval in Port-of-Spain for football matches and Liverpool said he always admired Hudson-Phillips as an astute lawyer, who learnt from one the best as his father was also a lawyer.