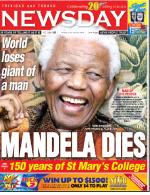 South African President Jacob Zuma made the announcement at a news conference yesterday at 5.45 pm TT time, telling the world, “we have lost our greatest son.” Mandela’s death at his home in Johannesburg closed the final chapter in South Africa’s struggle to cast off apartheid, leaving the world with indelible memories of a man of astonishing grace and good humour.

As South Africa’s first black president, the ex-boxer, lawyer and prisoner No 46664 paved the way to racial reconciliation with well-chosen gestures of forgiveness. He lunched with the prosecutor who sent him to jail, sang the apartheid-era Afrikaans anthem at his inauguration and travelled hundreds of miles to have tea with the widow of Hendrik Verwoerd, prime minister at the time Mandela was imprisoned.
Full Article : newsday.co.tt