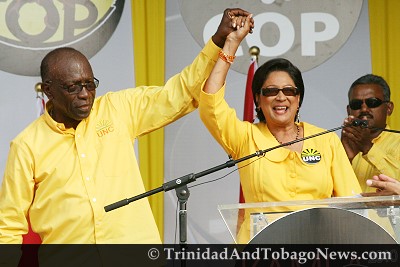 JUST a week before Nomination Day for the Chaguanas West bye-election, on Monday the gloves came off between Prime Minister Kamla Persad-Bissessar and former MP Jack Warner.

Several events on Monday firmed up our long-held suspicions of a fight in the making between the two erstwhile allies, with the PNM looking on from the sidelines. Persad-Bissessar rallied supporters around the UNC’s nominee, Khadijah Ameen, at the Vishnu Boys’ College, Caroni, while Warner’s rally was at the Caroni Community Centre.

In previous speeches, Persad-Bissessar had merely alluded to notions such as loyalty but with respect to no one in particular, but on Monday she trained her guns mentioning specific things and a specific person.

Her message was that in the July 29 Chaguanas West bye-election, Warner remains unfit to hold public office as he has been damned by a Concacaf probe over his dealings, and is allegedly under investigation by the United States law enforcement authorities. He is also the subject of a police investigation into the alleged re-establishment of the controversial Flying Squad under his ministerial tenure, added the Prime Minister. Persad-Bissessar pulled no punches.

She urged listeners to always see the bigger picture in their actions. “Put emotion aside and consider the consequences of your actions,” she said, basically urging voters not to be swayed to back a nominee who may be likeable but is otherwise unsuitable.

“Whenever it becomes necessary for me to act to protect the integrity of your Government, I have acted fearlessly in the national interest.”

Persad-Bissessar related that the People’s Partnership (PP) Government was elected on the basis of integrity and decency. “I don’t take lightly the integrity of my Government and your commitment to good governance.” She said that one cannot separate Warner’s woes in FIFA and Concacaf from his role as then Cabinet Minister, saying the football controversies are still in the public domain and could hurt the Government’s image.

The PM said that whilst one might have personal emotions and feelings, one must put the national interest first. In the case of the Chaguanas West bye-election, a candidate should be chosen who would have credibility nationally, regionally and internationally.

Persad-Bissessar said that should Warner’s name ever be cleared, “he’ll be reinstated”. That however looks increasingly unlikely due to a hardening of positions between the UNC and Warner.

Even with indications of a Warner’s candidacy to vie with the UNC’s Khadijah Ameen, Persad-Bissessar hit, “Anyone who stands against the UNC stands against every single one of you. United we stand, divided we fall.”

Last Monday Warner via his secretary took part in a dry-run for nomination day, which although not binding and not constituting any final list of nominees, nonetheless strongly alluded to his candidacy. Later at a meeting at Caroni Community Centre, Warner said he was adopting a new political symbol and the new political colour of green to distance himself from the UNC’s yellow, just as Persad-Bissessar had changed the party’s colour from orange worn under former leader Basdeo Panday. Warner said that on Friday he will announce if he is standing as an independent candidate or forming a new party, but whichever one it is Warner looks certain to run. As UNC officials have threatened him with expulsion if he runs against the officially selected UNC candidate, it seems Warner is “taking in front”. For now he urged constituents to fly green flags and vowed to make them forget the UNC’s yellow.

Even as the fight is so far seen as one of “person” (Warner) versus “party” (UNC), both sides have acted to broaden their appeal, with Warner trying to downplay the UNC while Persad-Bissessar used Monday’s UNC rally to bolster the stature of Ameen, who had once stood down to let Warner vie to be UNC chairman, ironically a post she is now acting in since Warner resigned all his posts.

The days will surely fly between now and July 29, and we can look forward to all campaigns stepping up into top gear!