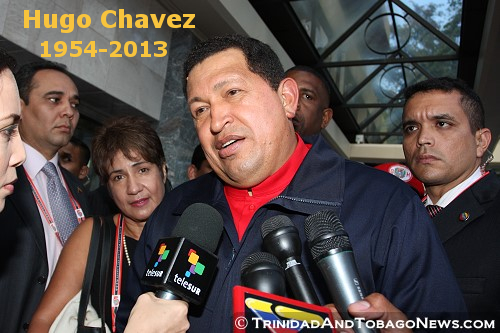 Since coming into power 14 years ago, Chavez embarked on a socialistic revolution that saw sweeping changes across Venezuela.

Riding on a wave of popularity from the poorer sections of Venezuelan society, from his inception Chavez quickly moved to challenge U.S. hegemony in the region, criticizing US imperialism, forging a close relationship with Fidel Castro and Cuba and inspiring a leftist movement across Latin American.

Domestically, he challenged the oil rich barons and elites who long dominated the political regimes in Venezuela as he redistributed land to the landless poor.

For his valiant efforts to redress the economic and social imbalances in the face of constant pressure to undermine the socialist revolution from both within and outside Venezuela, we at Trinicenter.com will remember him always.

7 thoughts on “Hugo Chavez dies after battle with cancer”