Tribute Delivered by Stephen Kangal at the Funeral Service held for the Late Horace Hollister Broomes on Tuesday 6th September 2022 at the Seventh Day’s Adventist Church on Stanmore Avenue, POS

Allow me firstly to express my gratitude to Horace’s surviving spouse Sumita for giving me this opportunity to say fare well to my brother Horace. 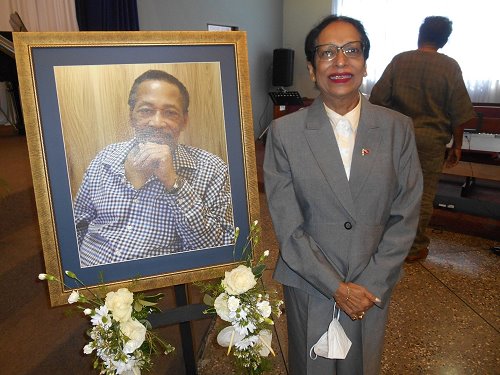 Horace you fought the good fight and triumphed against the many adversities that you confronted head on.

Well done to our departed brother. Enter into the joy of your Master and Saviour.

There is a special place reserved for you in the mansions of the Lord for those who truly loved and served his fellow men with distinction.

I send my condolences and sympathy to family members who have suffered loss of a very loving person including to his wife of 51 years Sumita.
Horace was a true friend, brother diplomat, fellow journalist and Colleague at the T&T Diplomatic Service.

In my view my late brother Horace lived a full, chequered, productive and fulfilling life in the service of the people of T&T abroad.

No canvas can be inclusive, large and expansive enough to fully and adequately depict and detail his larger than life colourful journey that originated in Tobago, then unto Trinidad and then to the world.

He was indeed a genuinely patriotic citizen of T&T.

We must celebrate today and for posterity his most fulfilling life.

It was a uniquely-travelled road, a journey filled with challenges and successes.

We recall and remember his many achievements in journalism, academia, foreign policy and diplomacy, law, exemplary father- hood and community service organisations.

In paying tribute to Horace I go back to 1963 when I first met him as a pioneering student at UWI College of Arts and Science while living at Junction Box in Curepe.

His life- long friend Michael Narine was in attendance also.

Michael cannot be here today but sends his regrets and condolences to the family.

In 1963 Horace was also the sub-editor of the “Evening News” published by the Trinidad Guardian.

Horace was a Tobagonian by birth and was very proud of his Tobagonian roots.

Of late I have been trying to dissect the elements of the unique, culturally different and distinctive Tobago personality and have written on it.

Tobago provided the nation of T&T with, inter alia, many distinguished and patriotic nationals including two Prime Ministers, a Governor of the Central Bank, Chief Justice, a head of the Public Service and the late Horace Broomes.

I admire the Tobagonian personality forged from the love of liberty, autonomy and real nationalism.

Horace possessed all the drive, physical attributes, devotion to the excellent use of the English language, intellectual prowess and the ambition not to be restricted by the challenges of insularity and the strong territorial imperative that a small mountainous Main Ridge island such as Tobago may impose but which the maritime ambience can neutralize.

I was sent to London as First Secretary in 1981 by the late George Chambers who succeeded the late PM Dr Eric Williams who passed away in March 1981 with Sir Ellis Clarke as President.

Three things I remember of Horace’s sojourn in London.

Firstly, how much care he took in settling me, Dr Winston Extavour, Bernard Weston and Dr Vincent Lasse as new officers in the High Commission in England then.

Sumita can testify to that.

It was a joy to see how easily he as a representative of T&T won so many English friends and influenced the T&T diaspora people living in London and elsewhere.

There was that friendship emitting diode in Horace body language that caused many people to gravitate to him in his official capacity and win many friends for T&T.

Horace was a most likeable person with an innate gift for writing the English language with precision, conciseness and warming elegance.

In London Horace used cricket fete matches as a tool of diplomacy and outreach of the High Commission. Under his tenure links with our British diaspora were strengthened and renewed.

He encouraged encounters on the field of play with the Diplomatic Police, Foreign Office, with Trinibis and Imperial College.

What also stood out for me most was his driving ambition to qualify as an attorney at law before leaving London to return to Trinidad.

Even though Horace had a slipped disc spinal operation through the kindness of a T&T Cambridge-based medic, Dr Kevin Gangar, Horace during the period of recovery continued unrelentingly to study at home in Hampstead Gardens Suburbs in Golders Green to attain his Law degree.

I can still remember Sumita arranging a makeshift desk on his bed to allow Horace to study with pain in his back.

That experience was mind boggling to behold.

In conclusion I say farewell brother. You enriched the lives of many who you touched.

The world was too small for your pilgrimage of life to be completed as you would have wanted.

Complete that journey before your Maker now.

But we are blessed to have met you and will cherish the vivid memories that you bequeathed to us.