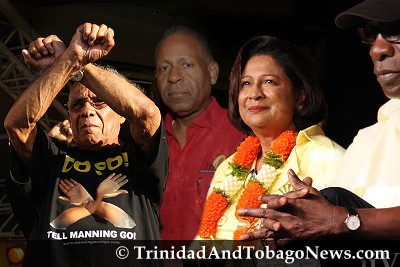 Here is my blunt take on this upcoming election. Neither the UNC and their United Force of Change nor the PNM are truly convincing to me but that cannot stop me from taking steps now that would be part of a process to get improved governance. Doing nothing is not an option as it can encourage the wrongs that exist to continue and for non-doers to be also complicit in them. There is no way that we will be absolutely absolved from complicity in the wrongs of any government. We have to continually work at ebbing away our complicity by working towards improved governance which starts with people being honest and objective about what they want and how they go about getting it.

There is no perfect solution or magical formula for developing the society. It is not acceptable to just elect people to office and trust they would do the right thing. We should be forever vigilant, demanding accountability and becoming involved in all major decisions. A government must not be allowed to act in secrecy and then tell us it is for our own benefit. The danger of corruption there far outweighs the national security concerns some may have with exposing certain projects and decisions. An example of this is when the government bought spy equipment from Israel and divulged nothing to date under the cloak of national security. Now we are left to speculate about who the government is spying on especially given the Prime Minister’s penchant for boasting of secret knowledge of individuals. Therefore, it is not farfetched to assume that there are abuses taking place with the use of that spy equipment.

We are not a monarchic state so our government must act based on ongoing, reasoned discourses with the population at large. It would be foolhardy to expect that we would all agree with everything a government does, but there are issues that most of us can agree on if only we are willing to think outside the limitations of our political and other biases.

About this UNC alliance: of course, we can always get change for worse, but that should not stop us from trying different formulas as part of a strategic plan to improve governance. Personally, I have no problem with coalition governments even if they break up from time to time. In some respects, a coalition government can be healthier as it allows for a wider scope of views and interests to be considered. It also can act as a check and balance against authoritarian leadership.

For now, I think Mr. Patrick Manning has to be voted out of office. Also, there is little chance that the PNM would remove him as leader of the party while he is the prime minister. If Manning insists on staying on as the leader of the PNM if voted out, then the opposition stands a good chance of solidifying themselves in power, and the rank and file of the PNM knows that.

The final straw for me that we should rid ourselves of Manning came with the sudden plan to increase the Property Tax and the bogus way they went about promoting it. If the Patrick Manning-led PNM wins, then they will impose that oppressive Property Tax to make up for the shortfall in revenue brought on by their squandering of our resources. Manning’s government would continue with the rapid rail and smelter plants projects while disregarding the concerns of various interest groups. So if voters return this administration to government, they would be voting for the further squandering of our resources together with increased taxation.

It is interesting that many PNM supporters are openly saying that they are not voting for Patrick Manning; they are voting for the PNM. In other words, they acknowledge that Patrick Manning must go while they are still saying that they will vote for the PNM. These supporters of the PNM do not have a strategy to bring about the change they want. Once they vote for the PNM they would be allowing Manning to continue with the policies within the party and in government that they do not support. Supporters of the PNM should be willing to strategically vote for an alternative party if they wish to rid themselves of Manning and several of his government’s plans. If the PNM loses the election then Manning can be forced to step down and the party can reorganize to become more democratic and attractive.

On the campaign trail Patrick Manning is trying to make heavy weather of old allegations of corruption surrounding Jack Warner’s dealings in FIFA, much the same as Basdeo Panday did during the internal UNC elections. The fact that they are unable to make any solid argument against Jack Warner following his entry into local politics leaves many questioning the relevance of their concerns with his dealings within FIFA. But Jack Warner, who by virtue of being Black, wealthy and speaks with a stutter, already attracts a certain amount of distrust and discrimination even without the allegations of corruption within FIFA. Many people still underestimate the power he wields. They just cannot fathom this little, stuttering Black man being so powerful in FIFA (the most powerful and White-dominated football body) and internationally as a result of his position there. No wonder from time to time, different people, including PNM ministers, have complained to FIFA about Jack and were quickly and resoundingly rebuffed by FIFA. (Maybe one day I would write about how Jack Warner rose to prominence)

If Jack Warner was a supporter of the PNM he would have been a national hero with several national awards. But because he supports the UNC, the PNM government would never recognize him. It cannot be about allegations of corruption because the government has shown it would protect some people in spite of strong evidence to support corruption charges against them. Andre Monteil and Calder Hart are two persons that readily come to mind. Anyhow, the PNM government is in no position to defame Jack Warner based on old allegations of corruption in FIFA. FIFA is very protective of Warner and all his actions in FIFA appear to be sanctioned by them. Dragging up comments from Jennings (the British writer who has been going after Warner for decades) is useless at this time. If Manning was willing to tolerate the wastage of hundreds of millions of our taxpayer’s dollars and possible corruption by Calder Hart, then he is not justified to condemn Warner for what he may or may not have done outside of Trinidad and Tobago.

There has to be a reason Patrick Manning has been so protective of Calder Hart. He has dismissed other members of his administration like Eric Williams and Franklin Khan for far less than what Hart is being accused of. He also dismissed Keith Rowley from his cabinet for raising concerns about possible corruption surrounding Calder Hart and UDeCOTT. I often wonder if Hart is holding something over Manning’s head.

Since Manning attempted to purchase a prime ministerial jet, I concluded that his ego is way too inflated and as such, he is a danger to us all. He then vaingloriously went on to construct the Prime Minister’s palace to the tune of hundreds of millions of dollars in spite of concerns about the state of the global economy. No amount of scaremongering and nonsensical talk about Indians possibly dominating Trinidad and Tobago would allow me to accept the corruption under this Manning-led PNM administration.

Patrick Manning called a snap election with the intention of not allowing the newly elected Opposition Leader Kamla Persad-Bissessar, time to develop and solidify her own policies and strategies for governance. Given that that was Manning’s intention I will not fault her too much for not clearly articulating how her government would move forward. I believe Kamla Persad-Bissessar will have to develop much of that plan along the way after consultation with various interest groups. She has committed herself to this process. I have no problem with that. The PNM has a plan of sorts largely involving a drain on the treasury and further squandering of our resources imitating the cosmetic development of the US and Europe with large buildings and lavish conferences that bring little or nothing to the people here.

Considering race relations, I do not expect the UNC under Kamla to be any worse than the current and previous PNM administrations – all of which never cared about addressing racial issues. More than that, the PNM discouraged the learning of and conscious development of our people through African history, among other things. They refused to allow media space on our state media for African programs while they allowed for Indian programming in the hope of garnering Indian support. Patrick Manning’s latest attempt at degrading the dashiki worn by NJAC’s leader Makandal Daaga together with his attempt to paint Dagga as a villain of sorts speaks volumes about where he stands on race issues.

I reject the idea that we should somehow be wary of an Indian-based government facilitating the development of the Indian community. The African-based PNM never showed any genuine interest in African culture and the African community and that is their fault. It is not even as if politicians really care about the development of their support base. We are yet to see a government that is bold enough to encourage learning from our different cultural perspectives as a prerequisite to removing racial distrust.

It is also evident that politicians really desire their support-base to be ignorant instead of developed. That way they can spin and evade serious issues while stealing and squandering our resources. A developed political base would choose better leaders instead of having them appointed and they would constantly challenge those leaders to operate more transparently and honestly. Our misleaders fear this.

The many things I dislike about the Kamla-led UNC alliance at this time are far less detrimental in comparison to what I dislike about the Patrick Manning-led PNM government. I would first be interested in seeing the back of Manning before I challenge the UNC about the issues that I feel they should address.

17 thoughts on “Election 2010: An Opportunity for Change”