Historically, coalition Governments are not known for their longevity. This is mostly due to competing ideologies and hugely inflated egos that inevitably collide. However, I believe that men and women of conscience, good intentions and integrity could make any coalition work. The recently created Democratic National Alliance (DNA), forged from the leftovers of otherwise insignificant parties has the potential to form an effective coalition if it contains the right ingredients. In culinary terms, it must be a political paleau or a callaloo if you prefer. As Trinbigonians, we all enjoy paleau and callaloo if prepared with love and all the essential ingredients are present – hot pepper and all.
END_OF_DOCUMENT_TOKEN_TO_BE_REPLACED 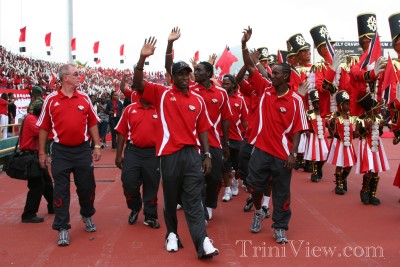 The Hasely Crawford Stadium was filled with thousands of supporters from all over the country to officially congratulate the Trinidad and Tobago football team, the Soca Warriors, on their World Cup efforts. Trinidad and Tobago was unable to make it to the second round of the World Cup football competition after being defeated by Paraguay, but they were successful in entering the annals of history as the smallest country to ever qualify for this competition. It was for this reason that the entire nation was proud: win, lose or draw.
END_OF_DOCUMENT_TOKEN_TO_BE_REPLACED

Now that TnT’s Soca Warriors have ascended the stage of global sporting events a la 2006 FIFA World Cup, it is apropos to take a look at the glory of global sports events.
END_OF_DOCUMENT_TOKEN_TO_BE_REPLACED

This article seeks to unlock the door to Afrikan-Trinbagonians’ misconception, misuse and bastardization of vital Afrikan concepts/terms.
END_OF_DOCUMENT_TOKEN_TO_BE_REPLACED 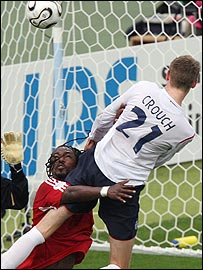 First with the story was the Daily Telegraph whose “Controversy over Crouch ‘tug’” on Friday said Crouch’s goal was overshadowed by controversy when television pictures, which appeared to show him pulling Sancho’s hair, were highlighted by German commentators and pundits, despite the referee missing the incident. The Telegraph said Crouch had “appeared to grab his dreadlocks before climbing above him to steer David Beckham’s cross past Shaka Hislop.”
END_OF_DOCUMENT_TOKEN_TO_BE_REPLACED

Any analysis of T&T politics that has evolved in the last 50 years must begin with an appreciation of a core ethnic base that supports each of the two major parties. The Indo- T&T core has traditionally supported firstly, the PDP followed by the DLP, SDLP, the ULF, the NAR and now the UNC. The core rural support group is the same- only the names and labels of the political vehicles have changed. Indian leaders have in fact been political hawkers using the expanding ethnic base to sell their political goods and reap in huge personal benefit returns without commensurate rewards being realised by the governed.
END_OF_DOCUMENT_TOKEN_TO_BE_REPLACED

The Issue of The Trinity, revisited By Linda E. Edwards

I have no doubt and am certain that Ms Edwards is correct in her assertions that certain elements within Trinidad’s Hindu and (perhaps less) the Muslim community are pushing a narrow agenda with regard to the re-naming of this nation’s highest award. This agenda, apparently, goes back quite a long time to the early days of the Federation when certain high-ranking elements in the Hindu community organised a petition to the colonial authorities in London in an attempt to delay the granting of the Federation fearing that their culture would be overwhelmed by a dominant Afri-Caribbean culture.

But let’s hold up a bit and ponder a few things; things that were (inadvertently?) pointed out by Ms Edwards herself.
END_OF_DOCUMENT_TOKEN_TO_BE_REPLACED

Straight off: I haven’t read the book or seen the movie – yet. I have, however, seen most of the going documentaries, and have processed a good deal of analysis, especially from the internet. I’m also conversant with the Holy Blood and the Holy Grail, whose authors recently attempted to sue DaVinci Code author Dan Brown for plagiarism. So the material is familiar enough. Anyway, the book itself is not what I want to discuss.
END_OF_DOCUMENT_TOKEN_TO_BE_REPLACED

What has happened in that “prestigious primary school” in West Trinidad, as reported in the Guardian on Saturday, June 3, 2006, is stunning in its barbarity. Educators at a school allow a security guard to rape an eleven year old girl a second time, in order to “catch him in the act”, and then allowed him to leave without calling the police?
END_OF_DOCUMENT_TOKEN_TO_BE_REPLACED

GOVERNMENT intends to change the Trinity Cross, the country’s highest honour. Government has made its decision in light of a ruling by Justice Peter Jamadar that the nation’s highest award amounts to discrimination against Hindus and Muslims.
END_OF_DOCUMENT_TOKEN_TO_BE_REPLACED