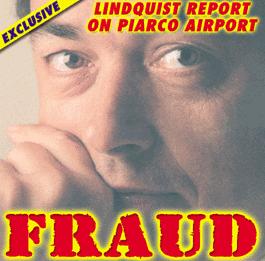 The Lindquist Report on the Piarco Airport Development project now establishes the enormous, indeed unbelievable, extent of corruption involved in this scandalous affair. Ever since Justice Deyalsingh had pronounced on the illegality of the original contract and the country's engineers had condemned the non-tender award, the project had acquired a certain notoriety which grew as the work progressed. Still, what has now been revealed to us as a result of the investigations of forensic investigator Robert Lindquist amounts to a horror story beyond anything we had imagined. To begin with, this project makes history as it is the first to be conceived not simply as an effort to provide the country with a required facility but more so as a tremendous opportunity for plunder, for the exorbitant enrichment of friends and supporters of Mr Panday's government.

As Mr Lindquist points out, the selection of Northern Construction (owned by Mr Ish Galbaransingh) for a new contract following the suspension of Construction Package 6, as well as the selection of Northern following the bid process on two other contracts "were all the result of an original conspiracy to corrupt the contract selection process for the unjust enrichment of the 'players' and of defrauding the various state agencies of considerable sums." The shocking nature of this revelation is not easy to digest. It establishes a new and incredible dimension to corruption in the government, a deliberate, planned, well-calculated and cold-blooded design to use this mega-project as a device for systematically syphoning off millions of dollars into personal pockets. And it is clear from the number of "players" involved, the scheme must have had the co-operation of a wide range of participants both in the government and among the contractors engaged in the project.

According to the Lindquist report, the project began with six contractors and expanded eventually to 13 and the fraudulent schemes were perpetrated by the various parties throughout the entire contracting process. His investigations discovered such instances of fraud as price fixing and bid rigging; duplicate contract payments; false invoicing; defective pricing; co-mingling of contracts; conflict of interest; false representation; improper release of confidential information, product substitutes, tailored specifications and time limitations.

But if the level of fraud revealed in this project is absolutely shocking, it is equally amazing to consider that such a report was in the possession of the Prime Minister since January 2001, a full year ago, and he did absolutely nothing about it. In fact, Mr Panday continued to call on the critics of corruption in his government to "produce the evidence"! What more evidence did he want than what the Government's own hired international forensic accountant had provided his government? The Prime Minister's failure to act on this report, in light of his consistent refusal to appoint inquiries into a host of other corruption scandals rocking his government, is a serious indictment that must raise concerns about his moral fitness to hold office. His failure amounts to his condoning of this monumental fraud inflicted on the country for which taxpayers will have to pay hundreds of millions over the next 20 years. The PM's non-action is more troubling for the fact that he refused former AG Ramesh Maharaj funds for Lindquist to continue his investigations into other scandals and his assuming responsibility for two squads set up by the ex-AG, one of which was to assist the forensic investigator in his inquiries.

In scoffing at corruption in his government, did Mr Panday not think that the truth will out?

THE LINDQUIST REPORT ON THE PIARCO AIRPORT - Editorial

The Lindquist Report on the Piarco Airport - Pt 2

Deyalsingh not surprised at Lindquist findings

Newsday Editorial in response to AG
Surely Kamla was joking