Celebrations in Port of Spain 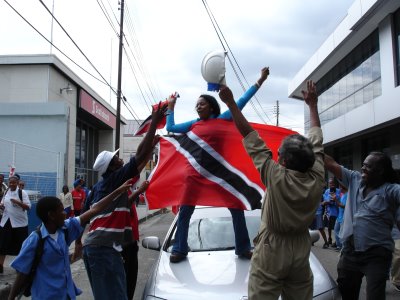 Celebrations in Port of Spain - Photos

Trinidad soar to Germany with win at Bahrain
www.soccerway.com
Trinidad & Tobago secured their first-ever World Cup finals berth on Wednesday, defeating Bahrain 1-0 in Manama and 2-1 on aggregate. In the 49th minute, Dwight Yorke's inswinging corner kick found an unmarked Dennis Lawrence in the area and the defender headed powerfully inside Hassan Ali's left-hand post to give the Soca Warriors the lead.

Carnival time as Trini go through
www.eurosport.com
A second-half goal by Wrexham's Dennis Lawrence has sent Trinidad and Tobago to the World Cup in Germany at the expense of Bahrain in Manama. Trinidad win 2-1 on aggregate after the 1-1 draw in Port of Spain to qualify for the World Cup for the first time. 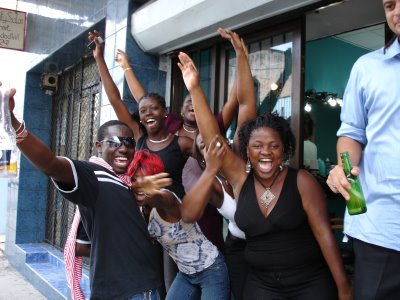 Calypso football wins through
skysports.com
Trinidad & Tobago defied the odds to book their ticket to next summer's World Cup finals with a play-off victory over Bahrain.

Trinidad and Tobago write footballing history
fifaworldcup.yahoo.com
Trinidad and Tobago are through to the FIFA World Cup™ finals for the first time in their history after a Dennis Lawrence header earned Leo Beenhakker's men a famous 1-0 victory in Bahrain. "We have to keep believing in our chances. There's no reason why we shouldn't put ourselves in a position to reach our goal," Trinidad and Tobago skipper Dwight Yorke prophetically declared ahead of the decisive clash at the Manama stadium in Bahrain. 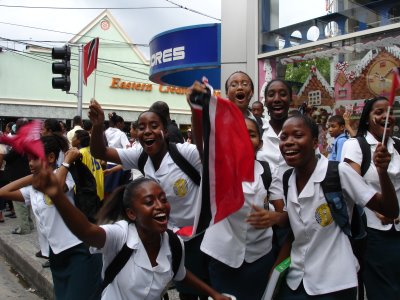 Bahrain 0-1 Trinidad & Tobago
news.bbc.co.uk
Trinidad and Tobago reached the World Cup finals for the first time in their history after beating Bahrain. Bahrain had secured a 1-1 draw in the Caribbean on Saturday, but were outplayed in the play-off's second leg.

Lawrence scored four minutes after half-time with a free header from Dwight Yorke's corner in Manama to send the Caribbean nation into the finals and earn the CONCACAF region a fourth World Cup place in Germany next summer. 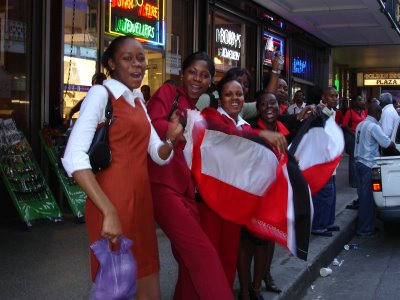 Bahrain (0) 0 Trinidad and Tobago (0) 1
www.sport.telegraph.co.uk
A headed goal by Wrexham defender Dennis Lawrence from Dwight Yorke's corner in the 49th minute earned Trinidad & Tobago a 1-0 win in Bahrain and a place at the World Cup finals for the first time.

It gave T&T, whose population of 1.1 million will make them the smallest country at Germany 2006, a 2-1 aggregate victory. Yesterday's second leg ended with referee Oscar Ruiz sending off Hussain Ali, of Bahrain. The Colombian official had been manhandled after correctly disallowing a stoppage-time goal by the home side. Fans threw seat covers and the evening ended in uproar with soldiers guarding the field as the players left for the dressing rooms.

A video clip of World Cup celebrations in Port of Spain

A video clip of celebrations

Another video clip of celebrations